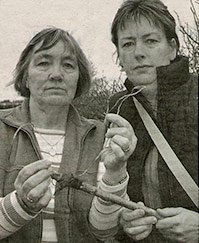 A cat missing on 18th February 2005 has been found dead in a rabbit snare. Joan Jenkins (left) and Susanne Harding hold up the rabbit snare which killed “Ginger.”

The death of a cat caught in a home-made snare has been branded “barbaric” by the woman who found the animal’s body.

Stourport resident, Joan Jenkins, of Lickhill Road North, found the ginger and white cat while she was walking her dog in fields near her home on Wednesday morning last week.

She was able to trace the owner after noticing a newsagent’s poster asking for help in finding the cat, which had been missing since February 18.

Mrs Jenkins, who thought the cat had not been in the trap for long when she found it, said: “It’s absolutely disgusting and barbaric in this day and age.

“He was tangled up in the barbed wire. Whether he got it from this area, I don’t know. He could have dragged it there from somewhere else.”

The cat’s owner, Susan Harding, of St Davids Close, believed six-year-old, George, was killed by a snare intended for rabbits.

She said: “We thought he would be back in a couple of days, as cats are like that, but he wasn’t. It was lucky that she saw the photo in the paper shop, otherwise we wouldn’t have known.

“We knew he hunted and we were worried he would be killed on the road but he was killed by something quite unexpected.”

Mrs Harding said she wanted pet owners to know about the traps, explaining: “I think the public should be aware of them because even a small dog, who was being walked, could get caught in the traps.

“I’m sure the traps are illegal. If rabbits are a problem they should be shot instead.”

George was later identified by Mrs Harding’s daughter and buried near where he was found.

Judith Haw, a spokeswoman for the RSPCA, said: “The RSPCA is opposed to the manufacturing, sale and use of all snares and traps that cause suffering. There is no body grip trap which does not cause unacceptable suffering.”