Setting snares for rabbits is largely a waste of time for pest control. This is because mortality from natural causes will have reduced rabbit numbers to their lowest level by the winter. Up to 90% of young rabbits born during the summer will have died by this time without intervention by man.

With numbers at their lowest, rabbits could be cage trapped and removed to an area where they will cause no harm, and crops are protected by fencing (see below.)

The humane traps should be set in short open vegetation and checked at least twice a day, early morning and late afternoon. For more information on the use of cage-traps for rabbit control the Rural Development Service has produced a comprehensive leaflets.

In many situations, electric fencing can be more cost effective than control methods that have to be undertaken year after year. Traditionally, permanent wire-netting fences have been used to deny rabbits access to vulnerable areas but more recently, temporary electric fences, either netting or multi-strand wire systems, have become popular methods of crop protection. When correctly erected and maintained, wire-netting and electric fences can reduce rabbit numbers on protected fields by 85-90%.

Netting fences should be constructed of 18 gauge, 31mm (11/4”) hexagonal mesh. They should be a minimum of 750mm (2’ 6”) high with a further 150mm (6”) lapped on the surface of the ground towards the rabbit harbourage. Turfs of grass should be placed on the lapped netting at 1m (about 1 yard) intervals to hold it firmly in place (vegetation should later grow through the mesh to complete this job). The netting should be attached to two 2.65mm (1/8″) high tensile spring steel straining wires (one at the bottom of the fence and one at the top) with galvanised fence rings.

There are two types of electric fence in common use: netting and strained-wire. Both have been shown to be as effective as wire-netting fences.

Electric netting fences are available in a number of commercial designs. Basically, they all consist of a heavy-duty polythene twine mesh in which the horizontal strands are interwoven with electrically conductive stainless steel wire. To prevent shorting, the steel wires are omitted from the bottom strand. They are between 0.5-0.75m (1′ 8″-2′ 5″) high and are supplied in 25m (82′) or 50m (164′) rolls in which the fence posts are already fitted. This type of fence is very quick and easy to erect and take down. more on electric netting fences

Electric strained-wire systems consist of seven parallel electrified conducting wires (7-strand, 16 gauge medium tensile mild steel) at heights of 5, 10, 15, 20, 25, 30, and 40 cm (2, 4, 6, 8, 10, 12 and 16”) above the ground. The lowest wire is earthed and the remaining six are live (a small length of wire should be wound around each of the top six wires to electrically connect them). Adjustable plastic insulators supported on metal stakes hold the wires. The stakes can be placed up to 7m apart (about 8 yards), although ground undulations may dictate closer spacing. Where the fence line bends, anchor posts replace the normal metal stakes. The whole system is tensioned at a reel post placed at the end of the fence. more on electric strained-wire fences

Both electric fence types have a useful life of about ten years. Electric fencing is cheaper to purchase and erect than wire-netting.

Agrisellex UK has a full range of electric fences and electric netting. For more information visit their website or call 01328 853266.

Most snares for game birds are set around release pens. Some gamekeepers are so lazy they do not even uses electric wire to deter foxes, considering it cheaper to put snares down.

However, there are a number of options to protect game birds: radios, reflective discs (old CD’s), electric fencing, lights. 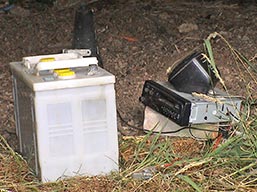 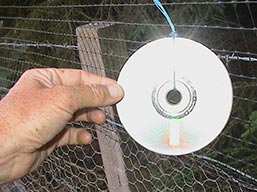 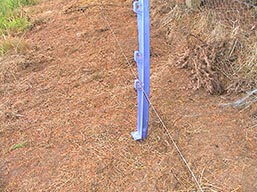 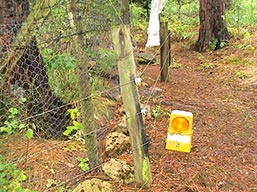 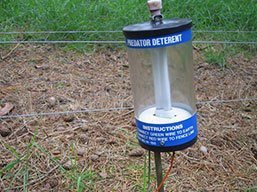 It is here that the ethos is total predator control and where bird of prey poisoning is rife. Here the only solution is to demand that all grouse shooting is licensed and only humane methods of pest control can be used (definitely not snaring). Any failure to comply would mean their licence was revoked. It would be amazing how quickly they would comply!

If foxes are causing a nuisance in your home or work environment help Foxolutions are able to offer a range of ethical solutions including fox repellents, fox deterrents, fox proofing and fouling clearance.