When to Find Snares

On pheasant shoots we find the most common time to find snares are July, August and September when the gamekeeper’s game birds are, or are about to go into their release pens. Some gamekeepers only set snares during a three week period between July and August.

On grouse moors, snares are often set in spring and early summer when foxes start to move onto the grouse moors. However, sometimes snares can be found all year round, even on lowland pheasant shoots, with the snares closed up on shoot days or when fox hounds are in the area.

Rabbit snares are less common, but can be found all year round and are usually made of brass rather than steel wire.

How to Find Shooting Estates and Grouse Moors

Check shooting magazines at libraries, they are a good source of information for anti-snare campaigners. Search the Internet for ‘Grouse Moors‘ and ‘Shooting Estates‘ (sometimes referred to as ‘Sporting Estates‘) in your area. Please note that many estates don’t advertise their involvement in bloodsport activity but some do.

A. Lowland Pheasant Shoots – Use OS Explorer Maps (above left)

Look for a large house, a “Hall” or manor, and look for wood strips, coverts, spinneys. An odd layout of woodland, perhaps resembling an airfield runway is often a giveaway.

B. Upland Grouse Moors – Use OS Landranger Maps (above right)

Look for woodland bordering the moors. If there are locations marked as “Shooting Huts”, “Shooting Cabins” or “Grouse Butts” and have isolated woodland nearby, there is a good chance snares will be found there.

What to Look Out for on Shooting Estates

a. On low land shoots, look out for “crop cover”, this is a strip of crop such as corn on the cop or kale surrounding woodland. It is usually only 20 metres deep, and designed for the game birds to forage in.
b. Look for feeders. Often an upturned drum with wheat inside (below left).
c. If you spot a sign saying “Private, Keep Out” (below right) on woodland with the features of a. and/or b. above, then the sign is practically telling you there are snares in this wood.

Where to Find Snares on Shooting Estates

Most snares are likely to be set around the perimeter of the pheasant release pens in woodland. Some may be anchored to trees, others to logs.

A snare set by a pheasant release pen (above left), and anchored to logs (above middle). Snares can also be set away from the pen, usually on some animal run that goes near the pen (above right).

What to Look Out for on Grouse Moors

On the grouse moors (above photo) look for fenced in gorse, and particularly conifer plantations.

Where to Find Snares on Grouse Moors

On upland shoots look for snares on fence lines, on holes in walls, and channelling (where branches are placed to direct animals to the snares).  Snares are often anchored to logs. You may also find a pen on upland shoots as partridges or pheasants are often shot at the edge of grouse moors.

Snare set at a wall (above left), at a fence (above middle) and channelled areas using branches, directing animals to snares or “stink pits” (above right) where dead animal carcasses are used to attract foxes to snares.

Recently there has been a trend towards “wild bird shoots”. Birds such as partridges are encouraged to breed in the wild, and so there may be no pen. Look for snares in field margins: small strips of cover adjoining fields or in fence lines.

When you find a snare you need to quickly determine what type of snare it is and determine if it is legally set. You are likely to come across a range of snares from the dual purpose snare, such as the AB Snare, which can be set as a free running snare or self locking snare, to crude home made snares to the callous kill pole snare. It is important you familiarise yourself with these.

Where to Find Traps

Animal traps without exception are set all of the year round.

Most spring traps are likely to be set close to pheasant pens in woodland, some at gates parallel to walls, holes in stone walls, the base of trees, and others across small water crossings. 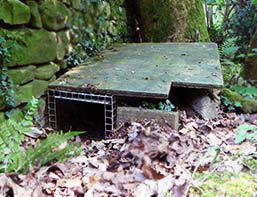 This cage trap, used for catching rabbits, was partly hidden by a wooden cover.

On upland shoots you are most likely to find traps across any small waterways even if they are dried up.

In the example above, of a Fenn Trap found on a grouse moor in Scotland, the trap has been placed on a wooden plank, between two stones with a wired metal mesh cover. This is the most common type of trap you’ll find on a grouse moor.

A good starting point to look is any small stream close to a dirt road likely to be used by the gamekeeper. Traps can be within metres of tracks and footpaths but carefully hidden out of view of ramblers. Once you find one there is likely to be more along the same stream or channel crossing.