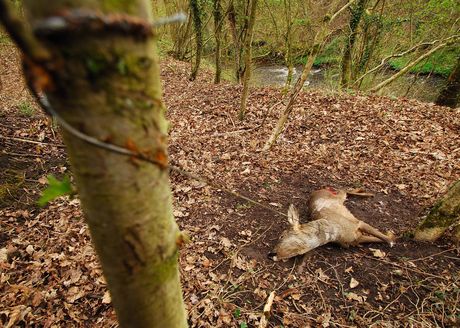 A WILD deer lies motionless after suffering an agonising death in woods near Craigneuk, Wishaw

And the Wishaw Press makes no excuses for showing this shocking act of animal cruelty, because we are asking our readers to help track down the cruel person or persons responsible.

Animal welfare experts say that the roe deer would have suffered a gruesome death and have branded the abuse as “sickening”.

The animal was found caught in a snare alongside the River Calder and would have suffered terribly before being put out of its misery.

While the man who found the deer didn’t want to be named, he told us: “Whilst walking along the Calder water from Ravenscraig to Calder Bridge my cousin and I came upon a roe deer which had been snared next to the river, close to the railway viaduct near Craigneuk.

“Fortunately for us the animal was dead, for to have witnessed such barbaric cruelty would have been an absolute nightmare. It appears that someone has specifically set out to snare a deer and just leave it to suffer a cruel horrific death.

“I did contact the wildlife officer at Strathclyde Police, so hopefully progress is being made there. I hope by publicising this it will help inform the public in Wishaw of the absolute cruelty that happened and it may help catch the idiots responsible.”

Showing this sickening acts of savagery is not a decision the Wishaw Press took lightly, but perhaps the image of its broken body will help track down the people responsible for this horrific animal cruelty.

It was discovered in the woods on Sunday, April 8, and the Scottish Society for the Protection of Cruelty to Animals are asking for information to help them track down those who did this.

Scottish SPCA Chief Superintendent Mike Flynn said: “Snaring is cruel, indiscriminate and unnecessary and the only way to stop animals from suffering in snares is an outright ban.

“No amount of regulation will prevent non-target species such as wildlife and domestic pets from being caught and even killed in snares.

“Members of the public can call our animal helpline on 03000 999 999 if they know anything about this particular incident or if they see a snare and have any suspicions as to whether it is legally set.”

Please get in touch with the SSPCA if you know anything at all – and with your help we can catch whoever is responsible.