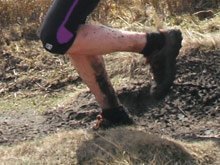 OUTDOOR enthusiasts have warned someone could be seriously injured on the Peak District moors outside Sheffield after two fell runners were caught in animal snares.

Landowners are legally entitled to use the simple wire traps to control vermin, even on access land used by hill walkers, rock climbers and orienteers.

But countryside lovers say it is only a matter of time before someone suffers a serious injury – and activists claim a walker or runner could die if they are badly hurt in a remote area.

The married dad-of-two from Crookesmoor, Sheffield, told The Star: “I was leading a run just off the A57.

We ran a route we hadn’t run before and found a mown strip where the going was really good.

“We jumped a fence and then 10 yards later I was flat on my face with a snare around my leg.”

Mr Tett, aged 50, said the wire trap caught him just above the ankle, where it was cushioned by his sock.

“It drew blood but the injury was not too bad,” he said. “If it had caught me a little bit higher it might have been a different story.”

The group – members of the 350-strong Dark Peak Fell Runners club – found dozens of snares nearby.

A fortnight later Mr Tett travelled to the World Masters orienteering championship in Switzerland, where he won the sprint title in the over-50s class.

But the IT consultant said if the snare had caught him on bare skin it could have seriously injured him, ruling him out of the competition.

A few weeks later Nick Collier, another member of the Dark Peak club, was caught by another snare on a well-used path under Bamford Edge, near Ladybower Reservoir.

He told The Star: “I believe the Peak Park have a moral obligation to act now, before anybody else is injured.

“Catching your foot in a snare comes with no warning and could easily lead to a serious injury such as a broken pelvis.

“The location of these snares means medical help is not readily available and could lead to someone’s death. If someone is alone it could be hours before the Mountain Rescue gets to them.”

But the Park Authority said they were powerless to act.

Mike Rhodes, rights of way and access manager, said: “We are concerned to hear fell-runners have been injured.

“We have spoken to the landowner about it but at the end of the day he is within his legal rights to set snares for vermin and the fell-runners are within their rights to be on open access land.

“We have no legal powers to take action in situations like this.”