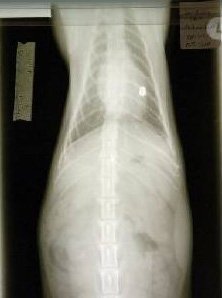 A cat trapped in a snare and then shot in the spine and ribs in Kettering has been described as one of the worst cases of cruelty a vet has ever seen.

When Donna Clorley’s two-year-old long-haired tabby cat called Radar went missing for two days she knew something was wrong, but didn’t expect him to reappear at the back door of her Desborough home injured, with the metal snare still around his neck.

It wasn’t until Radar was taken to a vets and x-rayed that it was discovered he had also been shot twice.

Mrs Clorley said: “I don’t know how someone could do something like this.

“Radar came back and he was walking funny and not looking right. I could see the snare around his neck and took him to the vets.

“We were told he had been shot and had bullet wounds to his spine and ribs and he was very lucky to be alive.

“It’s been very distressing, it was my eight-year-old daughter who found Radar at the back door of the house.” 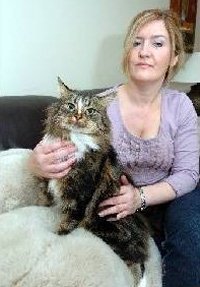 Radar needed surgery to remove the pellets from his spine and ribs. Surgeons could remove one but the other shattered and only fragments could be removed.

He is now recovering at home on the Grange estate but is not allowed out of the house.

She said: “I have been a qualified vet for eight years and I have never seen anything like this.

“Where he had pulled on the snare it had broken the skin around his neck and the pellets had sucked some hair inside him which caused something similar to an abscess.

“He is a very lucky cat, he was very nearly shot between the vertebrae which would have been a lot worse.”

Northamptonshire Police’s wildlife and countryside liaison officer PC Claire Salmon said: “Snares are legal traps as long as they are free-running – this means that they can’t lock and tighten in place if an animal is trapped.

“Self-locking snares are illegal, and interference with legally set snaps and snares is an offence.”