AN INJURED cat has been reunited with its owner after being caught in an illegal snare. 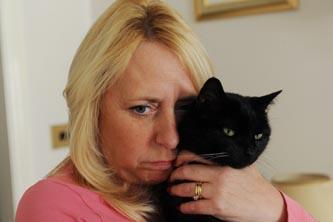 Harley suffered deep lacerations in her stomach after being caught in the home-made trap, made from wire and a fishing pole, in fields near Marshland Grove, Fegg Hayes.

The 12-year-old female cat was found by a man out walking his dog. He immediately realised Harley was in distress and took her to a vet.

Thanks to his quick-thinking, Harley got the treatment which saved her life. She was sedated and the wire was removed. The wounds which circle her body were cleaned and treated.

Vets at Blue House Veterinary Centre in Biddulph believe she had been caught in the trap for 24 hours and if she had struggled any more, it would have sliced through her body.

After her treatment, the RSPCA launched an appeal in The Sentinel to reunite her with her owner.

Angela Stanyer, aged 48, of Hollington Drive, Fegg Hayes, had spent days searching for her much-loved moggie and when she saw the article she was overjoyed.

The mother-of-one said: “Harley and my other cat Mischief always go out together but they never wander far – they are both very homely. I was so worried about her when she didn’t come home.

“I was asking all the neighbours and searching with my dog Dougie. He’s a Jack Russell and he’s very good with the cats, I thought he could trace her scent, but we had no luck.

“Then I saw the piece on The Sentinel’s website and I knew it was Harley straight away. Those traps are totally barbaric and inhumane. The people who set them are just nasty and I’d like to see them strung up in a snare.” 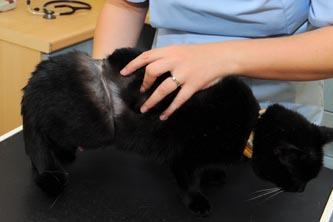 When the vets first saw Harley, they thought she would need surgery to repair the injuries but fortunately, the wounds have started to heal and with lots of care and attention, she is expected to make a full recovery.

The dog walker who discovered her said he found three similar snares in the same area and released a fox from one of them. It is believed the snares were set up to catch wildlife.

Mrs Stanyer said: “I can’t thank the vet and the man who found her enough.

“Their kindness saved her and it is so far removed from the nastiness of the people who set those snares.

“They were probably set to catch foxes, but all my neighbours and I enjoy having foxes in our area.

“I see them every night and we all leave food out for them. They must have known they were putting people’s pets at risk. It makes me feel sick when I see Harley’s injuries.”

It is illegal to set traps on public land and if they are used on private land, they must be set by professional experts, who consider the welfare of the animals they are targeting.

The RSPCA has launched an investigation into the snares which caught Harley.

Inspector John Groarke said: “It’s great that Harley has been reunited with her owner. She is now being micro chipped so hopefully, she will never be lost again. I would urge everyone to microchip their pets. Thankfully, no other animals have been caught in snares.

“The cat was lucky someone found her before she suffered a slow and painful death.”