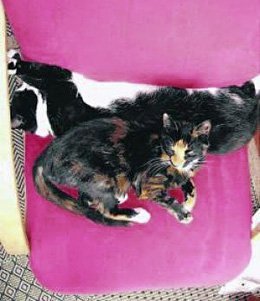 A MUCH-loved pet cat was lucky to escape a slow painful death after it escaped a snare in Poole.

Ginger, a three-month-old tortoiseshell belonging to Michelle Jeanes, returned home to Belben Road with painful injuries and a snare around her neck.

Michelle, 40, a company secretary, said: “When Ginger came in she was cold and wet and distressed. I thought a piece of wire was stuck in her neck, but I realised that she had managed to break free from a snare.”

The animal was rushed to the vet who found extensive bruising around her neck and most of her claws missing from the struggle.

Michelle is now worried for Ginger and her four other cats in case more snares have been laid. She added: “Ginger was incredibly lucky – I don’t know how she managed to break the snare but I’m very thankful that she did.

“This is a nasty way to trap a wild animal, and people should bear in mind that the victim could just as easily be somebody’s pet.”

RSPCA Inspector Graham Hammond, who is investigating the incident, said: “The device Ginger was trapped in appears to have been home-made but it was similar to an illegal self-locking snare which tightens around an animal giving them no opportunity to escape.

“Luckily Ginger got herself home and didn’t suffer a more serious injury. The use of a snare is unacceptable, but if someone is setting legal snares there are guidelines they must adhere to in order to prevent the target or other animals suffering unnecessarily.

“But even so, snares all too often cause their victims to suffer a slow and agonising death.”

The charity is campaigning to make snares illegal. At the moment traps can only be set with the permission of the landowner, should target one species rather than being used indiscriminately and it is a legal requirement they be checked at least once a day.