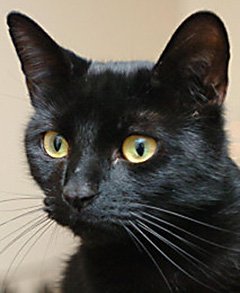 A CAT survived for four agonising days with its neck caught in a cruel snare.

Two-year-old Jet was trapped in a ditch near a Gaywood cycle track by a wire noose which tightened round his neck until he was struggling to breathe.

His owner, Michelle Scott, of Somersby Close, searched in vain for her pet and feared he was dead. Her daughter, Kayleigh Auker, refused to give up hope and on Sunday afternoon with her fiance, Jay Coffey, went for one last search along the cycle track between the Grange Estate and the North Lynn industrial estate.

After calling Jet’s name for about 20 minutes, they finally heard desperate miaowing sounds coming from an overgrown area. Former Welsh Guardsman Jay, 29, fought through undergrowth and brambles to find Jet and free him from the hand-made snare. A dead bird was nearby and may have been used as bait.

Miss Auker, 23, said: “For four days, Jet had been caught in an inhumane trap in the cold and wet with no food or water.” His neck was bloody and swollen from the wire and he had lost all the claws on one paw struggling to escape. She believes he survived only by being able to stand on his hind legs to relieve the pressure of the wire round his neck. “It’s a miracle,” she said.

Jet ate a huge meal after being rescued and then fell into a deep sleep. He was taken to a vet yesterday but was still too sore to be examined. Miss Scott, 46, said: “I was absolutely shocked. It’s monstrous. I don’t know how people can do it.”

Miss Auker, of Poppyfields, West Lynn, removed the trap and said: “I want to spread the word to stop other innocent cats being caught. I’m aware of other cats going missing in the area. Could this by why? I don’t want them to suffer as poor Jet did.”

Jet was abandoned by his mother when he was a kitten and hand-reared. He has also suffered a near-fatal urinary tract infection. “I think he has used up all his lives now,” said Miss Auker.