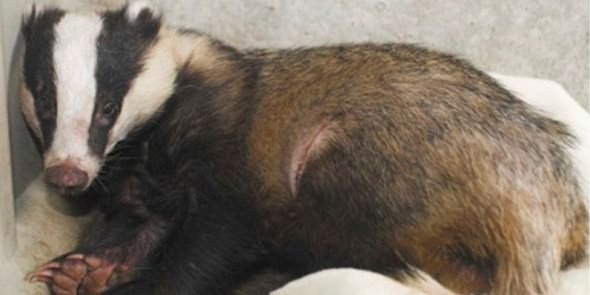 A badger found wounded in a snare in the Scottish Borders has recovered after treatment and has been released back into the wild.

The injured animal was taken by the Scottish SPCA’s ambulance driver Mairi Stewart to the Royal Dick Vet Hospital in Edinburgh.

After treatment it was transferred to the RSSPCA’s Wildlife Rescue Centre in Fife to allow the animal to build up its strength ready for release.

And the incident has led to a fresh call by the animal charity for a ban on all snares in Scotland.

Driver Stewart said:”The badger had a wound to its lower abdomen as the snare had caught it just above the pelvis area.

“Thankfully the wire had not broken through the skin and an ultra sound revealed no serious internal injuries, apart from some bruising.

“However, the badger had managed to rip out all of its back claws in its efforts to escape the snare, resulting in quite a significant loss of blood.

“It was very weak and dehydrated and vets estimated that it had been in the snare for at least twenty four hours, possibly longer.”

Search continues for those responsible

The society – which operates as a charity – has kept the location of the snare a secret.

Officers from the Scottish SPCA’s special investigations unit are still probing the incident.

Chief Superintendent Mike Flynn commented:”We are regularly alerted to incidents of non-target species being caught in snares including badgers, deer and domestic animals such as cats and dogs.

“These incidents highlight how completely indiscriminate snares are. While snaring continues, suffering will continue and that is why we are in favour of an outright ban on the use of snares in Scotland.

“We look forward to the planned amendment to the Wildlife and Countryside act 1981, which will make it a requirement for all snares to bear an identity tag making it easier to trace those who misuse snares.

“We hope that this will go some way towards preventing incidents such as what happened in the Borders.

“But while snares are still being used, we are in no doubt that non-target species will continue to fall victim.”

Anyone with information relating to the misuse of snares or persecution of badgers can contact the Scottish SPCA Animal Helpline on 03000 999 999. Information is treated in the strictest confidence