Police have been called in to the estate of one of Scotland’s wealthiest landowners after a badger was found dead in a snare.

It was discovered in woodland at Dunnottar on the 53,000-acre Dunecht Estate, near Stonehaven, Aberdeenshire, owned by the Hon Charles Pearson, brother of Viscount Cowdray. 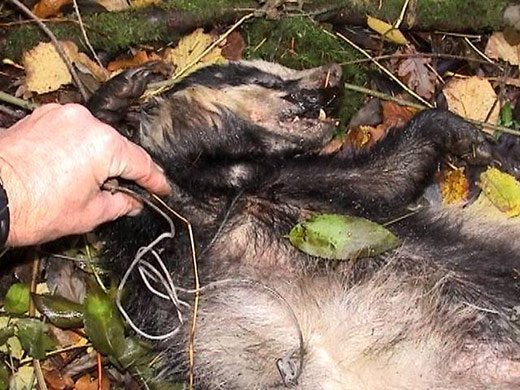 The find comes as MSPs this week debate the Nature Conservation (Scotland) Bill, giving parliament powers to ban snares. It will also come as a major embarrassment to the wealthy Cowdray family, who banned snares on their Sussex estate less than two months ago after a spate of badger deaths.

The Scottish Mail on Sunday can reveal that only two days after police investigation started, a second badger was discovered snared by the neck. But this time a vet managed to release it safely. Trijnie van-der-Meuien, 53, who rents a cottage at Dunnottar, found the dead animal.

Her husband Evert, 48, said: “It was a horrific sight – such a poor animal. It had tried desperately to escape, but had no chance.

“We moved to Scotland from Holland where snaring is banned and we cannot believe this cruelty is allowed. It makes us sick to think what a painful death the badger had.”

The farm worker added: “This snare was very close to rearing pens which will be filled with pheasants in the summer, ahead of the shooting season.

“Two days after we called the police we learned that another badger was trapped.”

Advocates for Animals campaigns director Ross Minett said: “Disgracefully, Scotland is one of a minority of countries in Europe that still allows these barbaric devices.

“The Scottish people like to think that we are a nation of animal lovers. How can we claim this when we allow the legal torture and death of countless animals by snares?”

A Grampain Police spokesman said: ‘It would appear the badger was caught up in a legal fox snare. We are now trying to track down the owner.’

A spokesman for Dunecht Estates said: ‘The land is leased to a shooting syndicate which is responsible for vermin control.

“Four snares were confiscated by the police who have informed us they were legal, free-running snares.

“This is a very unfortunate incident.”