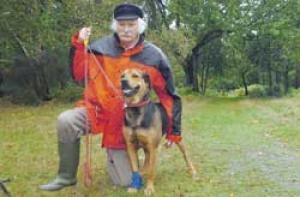 A PENSIONER says he feels “sickened and disgusted” after his pet dog was caught in an illegal trap.

Ken Webling, 78, was enjoying a walk in Chislehurst Woods when his Rottweiler Ben disappeared into the bushes.

The dog returned more than 30 minutes later, with his foot and shoulder bleeding heavily, having become entangled in the snare.

Ben had to be taken to an emergency vet, where he was treated for severe cuts and bleeding to the feet and shoulders.

Luckily, he survived the ordeal but Mr Webling now wants to see the back of these traps, before another unsuspecting pooch is not so lucky.

He said: “I’m angry and disgusted at what has happened to my dog.

“I don’t really see why these sort of traps should be put down anywhere, especially in places where people come to walk their dogs.

“Exactly what purpose do they serve?”

Mr Webling, of Mainridge Road, Chislehurst, has owned the two-and-a-half-year-old Rottweiler cross since January, when his previous pet dog died.

He admits this is not the first example of mindless cruelty he and Ben have had to endure.

He said: “There are people out there who are anti animals and will do anything to hurt them. In the past, I’ve even had people drive at my dog at high speed to try and run him over.

“I cannot imagine how anyone would want to harm an animal in this way; it sickens me.”

The snares, usually made from wire, are intended to trap animals like deer and badgers but increasingly it is domestic pets which are getting caught.

A spokesman for the RSPCA said: “Snares are one of the most cruel and indiscriminate killers of domestic animals.

“We believe there are more humane alternatives to the snare as a method of pest control.”