AN investigation has been launched after the remains of a deer were found at Ravenscraig, thought to be the victim of illegal trapping. 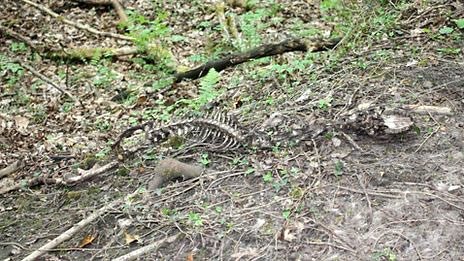 Officers from the Scottish SPCA and Strathclyde Police made the horrific discovery at the former steelworks site last Tuesday (May 29) and believe a home made snare was responsible.

By the time it was found only the deer’s skeleton was left, indicating the animal had been caught in the snare some time ago.

Scottish SPCA chief superintendent Mike Flynn said: “This poor deer would have suffered a horrendous death as a result of being caught in this home made and illegal snare.

“Thick wire had been attached to a tree with a loop on the end which was positioned at the deer’s head height.

“The deer would have walked straight into it, becoming instantly trapped, and the wire would have choked it to death.

“It could have been caught a number of weeks ago, but we can’t be sure as only the skeleton remains.

“We would advise anyone who may be visiting this area to be extremely vigilant, particularly if they are walking their dog.

“It is not at all uncommon for domestic animals, as well as wildlife, to be caught in snares, which are indiscriminate and cruel.

“While snaring continues, suffering will continue. That’s why the Scottish SPCA is in favour of an outright ban.

“We are urging members of the public with information about this incident or other illegal snaring activity to contact us as soon as possible. Calls are treated in the strictest confidence and can be left anonymously.”

Last year the Scottish Parliament rejected a bill to outlaw all animal snaring, despite high profile backing from Queen guitarist Brian May and a number of animal charities.

Uddingston and Bellshill MSP Michael McMahon said: “This issue contributed one of the largest mailbags I have ever had as while this isn’t what you would call a rural area there are a lot of people locally who are opposed to animal cruelty.

“Both ourselves (Labour), the SNP and I think the Liberal Democrats all made it a 2007 manifesto pledge for an outright ban of snaring, but when it came to the vote for some reason the Scottish Governmment starting moving away from that commitment.

“It is something that could come before Parliament again as it’s still part of the Labour party manifesto and lot of our MSPs are very keen to see it passed, but unfortunately it doesn’t look likely while the SNP are in power.”