Dog owners in the Chepstow in Gwent are being warned to keep close control of their dogs following the snaring of a terrier on a popular local footpath. A member of the public contacted Chepstow police after her dog became trapped in a snare in the woodland leading to Piercefield Park behind Chepstow Racecourse.

The dog, a small terrier, which became caught around the neck by the wire noose was lucky to escape uninjured.

The Police contacted Steve Clark of the Gwent Badger Group(GBG), as it was known that badgers were active in the area where the snaring had taken place.

“This terrier was extremely lucky,” said Steve. “The snare in question was a home made device that consisted of a fine wire noose. The dog sat still until the owner was able to locate it, if it had struggled the wire would have cut into its neck and severed the dog’s windpipe.” 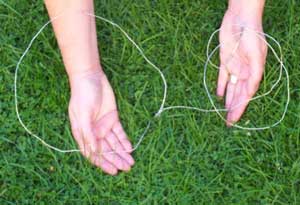 On visiting the area with the dog owner a further two snares were discovered, both set with total disregard for animal welfare.

“These traps were set at a low level in areas of dense undergrowth and would be lethal to any animal moving through,” continued Steve. “The setting of snares in an area inhabited by protected species, such as badgers, constitutes an offence under the Wildlife and Countryside Act of 1981 and carries a penalty of up to a six month jail sentence and fines of up to £5,000”

The GBG recently released a badger back to the wild after nine weeks of intensive nursing following a snaring incident that was highlighted by the press.

“I estimate the cost of nursing this badger back to health at close to £1,000, dog owners could be faced with similar bills due to actions as irresponsible as this” continued Steve.

Despite the increasing number of non-target species such as domestic pets and protected wildlife being killed by snares, the local MP David Davies has refused to sign an Early Day Motion banning their manufacture and use.

Whilst our MP tries to justify the use of these lethal devices under the excuse of vermin control, he seems ignorant of the fact that a study showed nearly 50% of the animals trapped or killed by snares were non-target species” said Steve.

Following the report of the snared badger the GBG received a huge response from the public giving names and locations of individuals setting snares. Steve added: “This problem is more widespread than we first believed.

We ask the public to be vigilant and alert us to any further incidents.