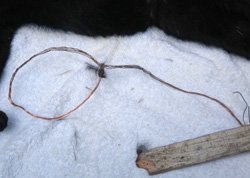 A much loved family pet died a slow and painful death after becoming trapped in an illegal home-made snare in Peterborough.

The lifeless body of a cat was discovered by a shocked member of the public in the Stanground area of the city with the snare’s wire pulled tight around her middle and still attached to the wooden stake.

Now the RSPCA is warning all pet owners in Stanground, especially in the Coneygree Road area, that more of the cruel snares may be laying in wait for their unsuspecting animals.

There are also fears it could trap a child out playing in the summer holidays and leave them with a nasty injury.

“The cat, which was around four years old, was microchipped and the owner was devastated when we broke the news to them that their cat had died.

“This was an illegal snare and I would like to hear from anyone who may have any information as to who may have left this snare in this area.

“I also want to alert pet owners in Stanground, especially in the Coneygree Road area, to the possibility that there may be snares nearby.

“If anyone does find a snare similar to this we would urge them to contact the RSPCA immediately.”

The cat was found dead on Monday by a member of the public in the Stanground area after it had made a desperate attempt to free herself from the trap.

AWO Hornig said the snare, which consisted of a piece of wire attached to a wooden stake, meant that the cat’s attempt at escape was futile as it become trapped behind the back of a shed and the snare made it impossible for her to get out.

It is then believed the cat died from a combination of dehydration and exhaustion as it struggled to get out of the trap.

She said: “I have been a pet owner myself so I know how upsetting this loss must be.

“This is the first I have heard about illegal animal snares in the area and I hope something can be done about removing them and putting a stop to their use.

“I hope this story warns other pet owners and also parents with small children to be vigilant and if they see a snare to report it to the RSPCA or the council immediately.”

It is not the first time snares have been found in the south of the city.

Five home-made snares were spotted in a field owned by Peterborough City Council near Fletton Cemetery over a two-week period in the middle of June.

RSPCA inspector Justin Stubbs said that RSPCA surveys show that only a third of the animals caught in snares were actually the intended species.

Now the leading animal charity are campaigning for snares to be banned completely, even those used to trap foxes and rabbits on private land which remain legal.

Anyone with any information about the snares is urged to call the RSPCA cruelty line on 0300 1234 999.