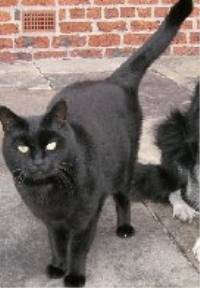 A DISTRAUGHT couple have warned animal-lovers to be on the lookout for illegal traps after their cat was caught in a snare.

Cheryl and Philip Tyler’s nine-year-old pet Charlie was found tied up in a home-made wire trap at about 3am on Friday morning.

They believe the trap had been put on their land by trespassers who had cut down hawthorn bushes and bent back barbed wire fencing, at Primrose Lane, Mirfield, Nr Huddersfield.

Cheryl said: “We normally expect Charlie to come in at night time, as soon as we put the lights out. He didn’t come in.

“I woke up at about 2.45am, had a look round and he wasn’t there. Philip went to have a look in the garden, and he heard a little mewing sound. It was Charlie caught round the neck in the trap. It was the sort of trap that tends to get tighter when the animal caught in it struggles.”

Philip said: “He would have been strangled if it had got tighter. I’m just so pleased that I found him. I was so relieved to see him.”

Cheryl went back out later to take a photograph of the trap but it had gone.

The couple also have a rescue pony, Freddie; a rescue dog, Lottie, and two other cats, Percy and Kitty.

Cheryl said: “We have never seen anything like this round here before so hopefully it’s a one off. Another thing that has upset us is they can just get on our land. Our animals should be safe on our property, so when it happens on your property it’s even more worrying.

An RSPCA spokeswoman said: “The RSPCA is very sorry to hear about what happened here.

“The society is opposed to the manufacture, sale and use of all snares and any trap which causes suffering. Even though some snares are legal and some are not, in reality they can all inflict suffering at random on a wide variety of animals.”