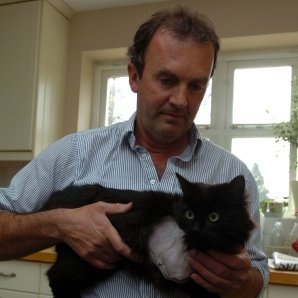 A FATHER from Shackleford has condemned the person who set a snare that maimed his cat as a vile, cruel and heartless lowlife.

Adrian de Candole’s black moggy Bo had been missing for five days before she crawled back to the family’s home, limping and dragging her front leg behind her.

Mr de Candole, a printer who used to run a mushroom farm, felt a metal noose under his pet’s fur and rushed her to the emergency vet.

The trap was removed but Bo had lost all feeling in her limb and the leg had to be amputated a few days later.

The family believe Bo resorted to gnawing off part of her own leg in an attempt to escape from the snare.

“It was a very upsetting experience, it is horrible to see her in so much pain,” Mr de Candole said.

“She had not had any food or water the whole time she was caught, and when she found her way back home she was very distressed.”

Mr de Candole and his wife, Zara, who have children aged 13 and 14, have had Bo since she was a kitten, and also own two other cats, Jasmine and Shakira.

He said Bo seemed to be recovering well and was adapting to life on three legs.

“Despite the name, Shakira is actually a tom cat. He is Bo’s uncle and they used to be very close and would always curl up together at night,” Mr de Candole said.

“When Bo came back from the vets, he was nestled in the bed and when Shakira came over Bo sort of miaowed because she was thrilled to see him.

“Shakira hissed at her and just walked away to go and sleep somewhere else. It was like he did not recognise his own family anymore.

“In a funny sort of way that was actually one of the most distressing parts about the whole experience.”

Mr de Candole said the family had been out looking for further snares but had not found any other traps.

“I think we are quite wary about letting the cats out now and it does cross your mind that there is a possibility of it happening again,” he added.

“But cats cannot be kept inside – that would be torture for them really.”

The 51-year-old said he was still hoping to find out who had set the trap.

“If I came face to face with him or her, I would tell them that what they have done to our cat is hideous,” he said.

“It is heartless and cruel. I think they are a pitiful lowlife actually, to inflict that sort of injury on a defenceless animal.

“I think they should be ashamed of themselves.

“I think they should take a good hard look at what they are doing and why, and consider the damage it causes.”

Simon Wild, a spokesman for the National Anti-Snaring Campaign, said Bo had probably been caught in a brass rabbit snare, which he said were often used by gardeners who wanted to keep animals away from vegetable patches.

“These type of snares are legal but the owner has a duty to check on them every 24 hours,” he said.

“That was evidently not done in this case, and perhaps if the cat had been found within that time window it would not have lost its leg.

“A mammal’s natural tendency when caught in a trap is to thrash around, trying to get out which, of course, causes far more damage.

“Snares are an indiscriminate and cruel method of catching animals in a way that causes intense suffering to them, and because of their indiscriminate nature there is a huge propensity for tragedies to happen.”