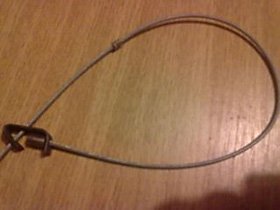 A FURIOUS mother says her dog was nearly killed by a snare at a popular walking spot.

Jayne Andrews, 41, and her eight-year-old daughter Rebecca King were walking their two dogs when they were horrified to see their much-loved pet Cleo fall, struggling to breathe.

The snares are not illegal, and are used by gamekeepers, but Mrs Andrews has now joined a national anti-snaring campaign.

“She would have been dead if I hadn’t been right next to her.”

They were walking on Rhos mountain on Friday near a natural pool which is used by walkers as a picnic area.

Mrs Andrews was next to Cleo when she was caught in the snare, but luckily her lurcher collar prevented any injury.

But Mrs Andrews said: “She was unable to breathe, bark, whine or cry and was frantic.”

She added: “It’s right-to-roam territory. Lots of people walk up there and take their dogs.

“We were innocently going about our business on a path that’s been used for generations,” she said.

“I’m absolutely furious these snares are still being used. My daughter could have had her feet in it. You could catch your foot and bang your head.”

She said her dogs were under close control, and added: “She’s a good dog, it is not as if she was running wild or up around the game pens.

“My dogs are well trained and well behaved, and I’m angry a dog could get caught in one of these things. Free running snares are vile but not illegal provided they are not set to catch people or protected species such as badgers.”

Cleo was taken in from a rescue centre four years ago, and Mrs Andrews said: “It took months to teach her to tether, I’m proud of her, but now she’s traumatised again.”

It is believed much of the land is owned by the Wynnstay Estate but a spokesman said they could not confirm if the area where the snare was found was within its boundary.

The experience led Mrs Andrews to set up a Facebook page protesting against the use of such snares, and to add her voice to the national anti-snaring campaign at www.antisnaring.org.uk.

Simon Wild, a spokesman for the National Anti Snaring Campaign, said: “Snares only have to be checked once a day, and that means potentially up to a 48 hour gap could exist legally.

“When an animal is caught in a snare they can often put up such a struggle that fully legal free running snares are tied up in such knots that they strangle the animal.

“Unfortunately, Wales still holds our record for the most snares found in one area, in Llangybi, Monmouthshire, where we found 300 snares in one wood.

“Snares bring shame on the Welsh parliament because it is not doing anything about stopping their use.”