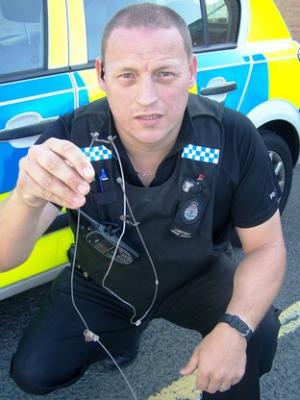 Illegal snares used to kill badgers have been discovered in Wyre Forest.

In the latest incident, at Blakedown, a badger was found dead in a locking snare on fields by Ladypool at the back of the parish offices after a member of the public contacted police last Wednesday afternoon.

On Wednesday, September 7, another badger was found dead after being killed by a snare inside a trap on land next to Puxton Marsh and Wolverley. It had been placed near a badger sett.

PC Albutt said: “Locking snares of this type suffocate animals and are illegal. Badgers are protected by the Wildlife and Countryside Act and the Protection of Badgers Act 1982, which makes it an offence to kill, injure or take a badger or attempt to do so using traps or snares.

“It’s a horrific death for the badger, which does not die quickly and it is completely inhumane.”

He said a joint investigation was being conducted with the Badger Society and from reports made to them it appeared to be an increasing problem in Wyre Forest.

PC Albutt added: “We will take strong action against those caught committing these cruel offences and they can expect severe penalties from the courts, with fines of up to £5,000 and up to six months in prison.

“We are appealing for information from anyone who knows who is responsible for setting these traps and snares and we would urge anyone who comes across them to report them to us as soon as possible.”

To contact PC Albutt, call 0300 333 3000. People with specific information relating to the badger deaths at Blakedown and near Puxton Marsh should quote the reference 343-S-121011.

Information can also be passed anonymously to Crimestoppers on 0800 555111.