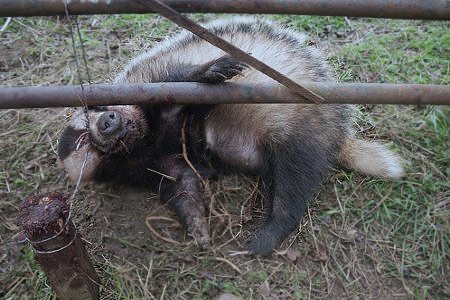 A BADGER died after getting caught in two snares at Ansty.

She was found by a farmer on the access road to Hillside Farm, off Coombe Fields Road, in Ansty.

The RSPCA are now hunting for the culprit who set two snares under the field gate which killed the animal.

One snare cut into her snout while the other was tangled around her back leg.

The snares had been placed under a metal five-bar gate that was the only open space in a long field hedge.

RSPCA inspector Ben Jones said he believes the badger could have been looking after one of its young who might have also died.

“Badgers search out their prey by scent not by sight.

“This poor badger probably thought the sticks and wire were part of the gate that they had passed under many times on their nightly prowls.

“We believe she was a lactating female so she may have had dependent young that could also now have died as a consequence.

“There was one stake with two wire snares coming from it, which means whatever got caught in it had no chance of wriggling free.

“The lethal device was set in such a way that it breached the Defra code of practice as it did not have a swivel at the anchor point and also it was set in a gateway.”

Mr Jones is urging anyone who saw anyone acting suspiciously in the access road to get in touch with them immediately.

He added: “The farmer didn’t see anyone on his land so we are appealing to anyone who might have witnessed someone setting the snare or acting suspiciously in the area to please contact us.”

Mr Jones added the RSPCA is opposed to the manufacture, sale and use of snares.

Despite this, the use of certain snares remains legal in specific circumstances.

He said anyone setting a legal snare should adhere to the Defra code of practice.

Anyone with information about the incident should call the 24-hour RSPCA national cruelty and advice line on 0300 1234 999.