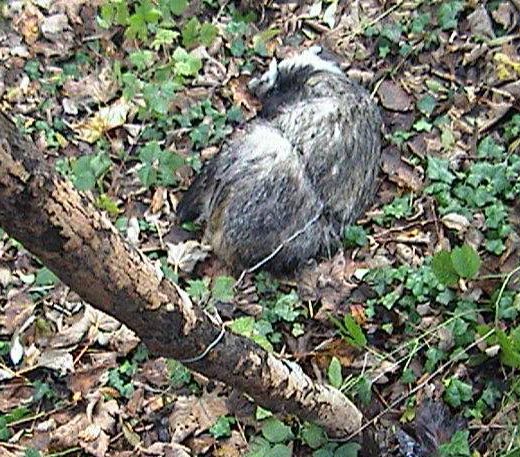 A badger has been found dead in a snare attached to a short log about 200 yards from the bottom of Cocking Hill, West Sussex. It appears that the badger had been struck by a car, but was dragging the snare and log with it.

Jaine Wild of West Sussex Badger Protection Group said: “Setting any snare that can be dragged away like this is an offence under the 1981 Wildlife and Countryside Act, because it is deemed to be ‘calculated to cause bodily injury to any wild animal’. If this badger had not been knocked down, then the log would have snagged onto some obstacle, and death would have been protracted and nasty.”

“About eight years ago we found the bodies of a snared badger and two snared foxes dumped in the railway cutting at the top of Cocking Hill, and also called the police about five years ago to an area about half a mile west of Cocking Hill, where there were snares set on similar logs.”

“Because the snare had been dragged away from where it was originally set, we cannot say who has set it, but it does come less than a year since the Cowdray Estate wrote to all their shooting tenants asking them not to set snares following two recent incidents of snared badgers at Bepton and Cocking. The police are looking into the matter, and we will be writing to the Cowdray Estate to ask that they investigate.”