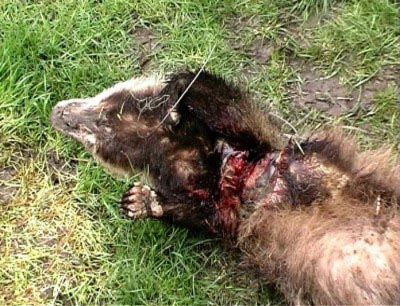 This badger was found dead in a snare in April 2001 at Terrick, near Stoke Mandeville, Buckinghamshire. The snare was found to be of the AB type. This type of snare is apparently free-running and legal – but in this case has sliced into its victim in the manner of an illegal self-locking snare.

The snare had been cut off at the base and left on the badger. A local investigation by the Police was unsuccessful, so it was not known where the snare was originally set or who had set it.