I received a telephone call at 20.22hrs on Monday 21st March 2005 from Gwent Badger Group Chairman Steve Clark to assist an emergency call made regarding a badger trapped in a hedgerow, this was a relayed call from our emergency line and originated from the R.S.P.C.A. I arrived on scene at approx 20.40 at (Location) where I was met by the person who reported the incident who then guided me over a fence and along a hedgerow of a small field to where Steve Clark and the caller’s accomplice were.

Looking into the hedgerow I could clearly see an adult badger completely tangled up in wire and bits of wood, the animal was extremely stressed and aggressive. Steve Clark secured the animal with a control pole and I proceeded to use cutters to remove the wood and wire from the animal, the wire proved very difficult to cut and it took at least 20 miutens to free the animal.

Once the Badger was removed from the hedgerow we found the wire too tight to remove on scene and we contacted one of the on call vets we use. The badger was taken to The Veterinary Centre we use, where the vet met us. The Badger was first weighed and sexed was approx 9kg and a non-lactating female the animal was then sedated for further examination. Upon examination it was found that the wire was in fact a snare, which had locked so tight around the animal it had started to cut into the skin, the tightness also caused the animal to urinate almost constantly. 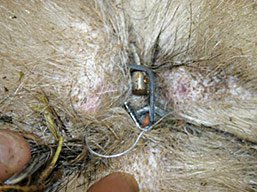 Removal of the snare took approx 30 minutes as the vet had to cut away quite a bit of tangled fur and bits of the hedgerow before he could then carefully and with some difficulty cut the wire and remove it from around the animal. Upon removal the vet examined the animal, it’s skin where the wire had been can only be described as a mixture of friction injuries with open sores and necrotic tissue, the animal also had a sore on it’s mouth probably from chewing the wire to escape, the Vet determined that the animal had been trapped for at least 12 hours.

The wounds were cleaned out and antibiotic cream was applied along with a dose of antibiotics and painkillers and taken into the care of The Gwent Badger Group. The Badger will be submitted for further checks and treatment in 2 days time unless it deteriorates in which case it will probably be admitted to the surgery.

The next day produced a few points of concern especially the fact that the Badger had a lame back leg so it was decided to book her into the vets for another examination. Upon arrival she was weighed again, and let out of the cage so that the vet could better assess the leg usage, which did not look good as she was just dragging it, so it was decided to x-ray her to look for problems with the leg and any internal damage as well.

The x-rays proved promising as there was no damage visible but concerns then lied as to whether she had damaged a nerve or already had the injury before being caught, this usually means that if there is no sign that it will heal in the near future that badger is it worthwhile carrying on with treatment or would she have to be put to sleep. The injury caused by the snare needed treating soon or the would be a very good chance of septicaemia setting in because of all the dead tissue, also the vet was under the opinion now that this badger had been in the snare for at least three days judging by the state of the wound so we decided to give her a course of antibiotics to keep the infection at bay for a few days and see if the leg improved. So to give her head start in hygiene she had some fur shaved away from the wound and was given a bath as she was in a bit of a state.

She was given special care by Steve Clark who monitored her around the clock, feeding her anything she would take, mostly with a syringe but she was getting fluids down her which was a start, and keeping the wound clean to combat the infection.

After nine days the leg had improved about 20% and now there was feeling there where there was none before so she had reflexes and was now trying to get the leg under her body and put weight on it. By this time the wound had started to split open which was expected so the decision was made to operate on her to remove the dead tissue and stitch up the wound. She spent approx 90mins in surgery and it all went well, she was fitted with a collar to stop her nibbling at the stitches and staples, and good shot of antibiotics and painkillers and a good scrub she was ready for a good rest.After waking up that night she was offered food and water by syringe and did drink quite a lot of water then bedded down for the night.

She had a drain fitted while in surgery which needed removal, and by this time she had got wise to the collar and promptly removed it and putting it back on is no easy task so it was back to the vets… Again. The drain was removed and collar fitted, this was to be removed again so now she is collar free but is being a good badger and leaving the wound alone.

Was offered a more solid rabbit tripe mix of food and got stuck in like there was no tomorrow and the leg is picking up even more so the prospects are good she will need to go back to the vets in six days time to have all the staples removed.

A gallery of photographs is available by clicking here. WARNING not suitable for children or easily disturbed as it contains medical procedures.

Quite a lot has gone on with the Sow rescued from the snare back in March this year most regular site visitors would have already read about and seen the pain and suffering caused to the badger and about all the hard work that has been ongoing since her rescue.

It’s now over eight weeks since the rescue and she is looking ready to be released for the last few weeks she has been under the care of Secret World who had a large area for her to exercise her leg which has healed up nicely and she has now returned to The Group to be released.

There is not much to say about the recovery of the Badger other than it is a long process and takes up a lot of time of those involved in her care and in all from the time she was reported in the snare it has taken the time of over 20 people from the group, the veterinary centre, the police, Secret World and members of the public to get her on her feet, The Group would like to Thank everybody involved in this incident for their help and time.

All going well and another trip to the Vet for a check up and if the weather is right the badger will be released soon.

Possibly one of the most successful releases in the long history of the Gwent Badger Group took place this week with the release of Miracle the 3 year old female badger that was rescued from a snare nine weeks ago. 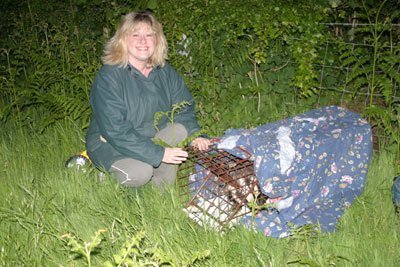 Rehabilitated from a pitiful state snared in a local hedgerow o watching her run at high speed down a field and back to freedom has been very rewarding, it has taken a lot of different people and a lot of hard work, sleepless nights and funding to get her back to the wild but we did it, Good Luck Miracle.

Before her release Miracle displayed her fitness to the local Cub and Scout Group the 1st Wentwood who were thrilled to get close to a badger and get a bit of education from Chairman Steve Clark.

We will keep you updated on any progress, as the area will continue to be patrolled and monitored by Members of the Group.

Please help the Gwent Badger Group by joining the group or make a donation here.