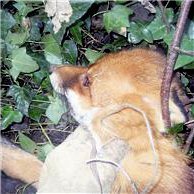 A PETRIFIED fox has been released from a lethal animal snare that was placed on a Flintshire school field.

The illegal trap was planted on the boundary of a primary school in Holywell.

School bosses have asked that the school not be named but Elfyn Pierce-Jones, from Flintshire Wildlife and Pet Rescue Centre, was called to the scene to release the fox on Wednesday morning.

He said the homemade snare, which tightens the more the animal struggles, posed a grave danger to the schoolchildren.

“We are talking about young kids here. If a child had seen the fox they could have tried to stroke it and been bitten.”

Food had been laid next to the trap in a bid to entice the animal.

Mr Pierce-Jones added: “Someone has gone there in the night knowing there was a fox there.

“This was a home-made trap someone has made to intentionally trap the fox. It’s not the school’s fault.

“The school is very concerned.

“Snares for catching foxes are legal as long as they are free running, meaning it will slacken off, but this was an illegal self-locking snare.”

The trap snared the fox around its neck and wire cutters had to be used to release the animal, which escaped unharmed.

Mr Pierce-Jones said: “If the fox had got its foot caught if would have chewed its whole leg off to get out, but thankfully it was round its neck and I got there in time.

“Any longer and it would have killed it.”

Police are now appealing for witnesses who may have seen the perpetrator laying the trap.

Anyone with information should call wildlife liaison officer PC David Allen on the non-emergency 101 number.