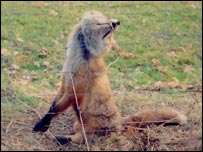 Animal protection officers have launched an investigation after a fox was found snared in Northumberland.

The Royal Society for the Prevention of Cruelty to Animals (RSCPA) reacted with anger after the animal was discovered caught by its neck near Cramlington.

It had fought against the illegal snare, but was left strangled and suspended from a wire fence.

So-called self-locking snares, which tighten with a ratchet-like mechanism, were outlawed in 1981.

The fox was discovered in fields near the A192, opposite Atley Way in Cramlington on Sunday.

Society inspector Jaqui Miller, who was called out to the incident, said: “Snares are one of the most indiscriminate killers of wild and domestic animals.

“They have been traditionally used as a method of pest control, but in reality they inflict suffering at random on a wide variety of animals.

“Victims of snares may die of strangulation, or they may weaken, stop struggling and starve to death or be killed by predators.

“I don’t like to imagine how long it took for this fox to die – it must have endured horrible suffering.”

The RSPCA believes there are humane alternatives to the snare as a method of so-called pest control, such as cage traps.