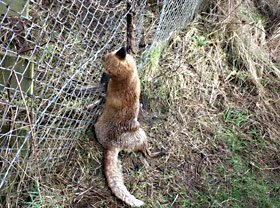 The Scottish SPCA is appealing for information after a fox was discovered in an illegal snare in Dumfries.

A member of the public found the animal at a waste water treatment works off New Abbey Road, last Wednesday.

The fox had effectively been hanged after becoming trapped in the wire snare which was attached to a fence.

The SSPCA believes it had been there for up to two weeks, and the snare, which had become rusted, was likely to have been set up several months ago.

Scottish SPCA Chief Superintendent Mike Flynn said: “Legal snares are only supposed to hold on to an animal until it can be freed or dispatched, they aren’t supposed to kill.

“This snare was set on to a fence, had no stop mechanism to prevent it from tightening too far around the animal’s neck and it clearly had not been checked within the 24-hour limit, all of which are legal requirements.

“This fox would have been caused an unimaginable amount of pain and suffering over a prolonged period of time before it eventually succumbed to its injuries.”

He urged anyone who sees a snare and has suspicions as to whether it has been legally set to contact the Scottish SPCA’s animal helpline.

Ch Supt Flynn added: “Local dog and cat owners should also be extra vigilant when allowing their pets outdoors as there could still be other live snares in the area.

“Snaring is cruel, indiscriminate and unnecessary and the only way to stop animals from suffering in snares is an outright ban.

“No amount of regulation will prevent non-target species such as wildlife and domestic pets from being caught and even killed in snares.”