A SIX-YEAR-OLD’S kitten almost had to be put down after getting caught in a rabbit snare the owners claim is illegal. 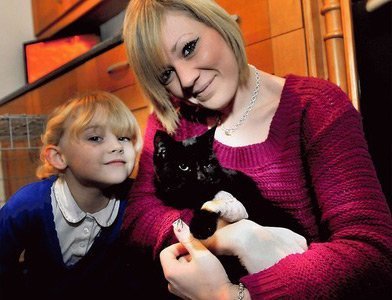 Amelia Shine’s cat, Darcy, had ventured out of the house on January 18 as normal, prowling the local gardens and parks along their road, Jarndyce in Chelmsford.

But when she limped home late that evening, the black cat was covered in metal wire and had cuts all over her legs and nose.

“The local area is very residential and dozens of children play in the parks where people walk their dogs. Leaving a snare anywhere in the area is a danger, it’s awful.

“Because it was late I had to take Darcy to an emergency vets in Billericay because the RSPCA centre on Maldon Road was closed. They said that her leg was broken and at that point there was a possibility of internal bleeding and we thought we might have to put her down.

“My daughter adores her cat and Darcy is part of our family.

“She was incredibly distressed when she found out that Darcy was hurt, she loves that cat so much.”

After visiting her registered vet, the RSPCA centre in Great Baddow, Ms Shine was forced to take Darcy to a private surgery so that the one-year-old cat could have X-rays and treatment to fix her leg.

The 29-year-old single mother said: “Darcy is quite the home bird and she doesn’t travel very far. She was incredibly distressed and in a lot of shock.

“I just can’t believe that someone would purposely set a trap like that. They are designed to kill and most are illegal.

“It’s not like there is a bad rabbit problem in the area and there are tonnes of foxes. A lot of my neighbours have cats and one of them is concerned that someone set this trap because they are fed up with so many being in the area.

“I was incredibly lucky that my parents agreed to help me out with payment for Darcy’s vet bills. As a single parent, I work but I wouldn’t have had the money to pay for the X-rays and operation.

“The total bills have come to over £,000 but it is not the question of a cat, Darcy is part of the family.

“She has got bundles of character but we can’t know how well she will respond to treatment.

“The vets have put metal plates in her leg and they are hoping that she will be able to walk properly but we can’t know yet whether she has suffered from nerve damage.”

A police spokesman said: “Police are investigating a case of animal cruelty after a cat was injured in Chelmsford.

“Officers were contacted by a woman shortly after noon on January 19 following reports that her cat had returned the previous evening with a rabbit trap on its leg.

“The snare has been recovered by police and will be examined in the next few days to see if it’s an illegal trap.

“If the trap is self-locking this will make it of the illegal kind.”