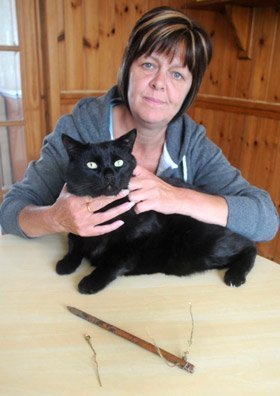 A WHITNASH woman is warning pet owners to be wary after her cat was caught in an illegal snare on Sunday.

Shirley Malin, of Palmer Road, was shocked when her eight-year-old cat Disco returned home still partially caught in a device after he had been missing for ten hours.

Miss Malin said: “It is scary to think about, if you are going to scare an animal throw some water at it don’t set an illegal snare.

“Cats are quite clever they wouldn’t just stick their head in a noose there must’ve been some food there to entice him.

“If people know about this then maybe they will think twice before they set another snare.”

Disco has managed to dig the snare out of the ground but he sustained injuries to his ears, mouth and paws which cost Miss Malin more than £200 to pay for emergency veterinary bills.

The RSPCA is urging anybody who knows of anyone who is setting illegal snares to call its national cruelty and advice line on 0300 1234 999.