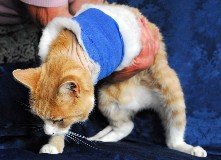 AN animal lover has branded the use of snare traps evil, after her pet cat was trapped in one for almost a week.

Hilda Hancock’s 12-year-old ginger tom, Willow, had to have his leg amputated after crawling home on Monday.

She said: “It’s just evil to endanger animals in such a cruel way. I can’t understand the mentality of people who would use traps like that. I don’t know if he escaped from the snare or if he was set free by whoever put it down, but God only knows how he survived. He was covered in maggots when he came home.” Mrs Hancock, 71, has lived at Field Lane, St Helens, with her 70-year-old husband, Bob, for more than 20 years. The couple have two other cats.

Island RSPCA inspector Mark Buggie, who has seen countless animals, including dogs, cats and badgers trapped in snares during his 20 years in the job, agreed with her sentiments.

He said: “These snares are dangerous to pets because they are indiscriminate. They are used in the gamekeeping industry but it’s an evil, inhumane way to control pest species. The RSPCA is against their use.”

Mr Buggie also said anyone who found their pet trapped in the thin wire noose of a snare should report the incident to the RSPCA.

“It’s difficult to discover who puts the snares down but we can investigate if people report it,” he said.

Mrs Hancock added: “Maybe this can serve as a warning to other pet owners. We advertised Willow as missing last Tuesday.”