A “BARBARIC” snare left a cat choking to death in the countryside near Truro.

The device garrotted the ginger tom which was left needing emergency lifesaving surgery. 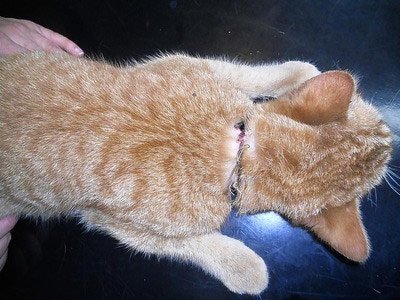 The one-year-old named Ginger broke free from the contraption with the wire of the snare embedded in its neck.

Ginger’s owners, who asked not to be named and live between Truro and Redruth, contacted the Truro and District Branch of Cats Protection after their pet arrived home in extreme anguish.

Karen Varker from the charity, said: “It’s been designed so the wire tightens the more the animal struggles – it’s like a noose.

“It’s barbaric. It’s a tiny little cat who hasn’t done anybody any harm and now he faces a long and slow recovery process.”

The West Briton decided not to publish graphic photographs of Ginger’s injuries before treatment by the City Road Veterinary Centre.

Mrs Varker said: “He was slowly choking to death. The wire was embedded in his neck and it basically garrotted him.

“This cat must have been in agony trying to free himself.

“The vets had to cut the wire off with industrial bolt-cutters.”

Mrs Varker believed the snare to be a legal device used to catch rabbits.

“I’ve been a volunteer here for 20 years and I’ve never seen anything like this,” she said.

Vet David Leedham, who removed the wire, treated the wound and gave Ginger antibiotics, said: “These snares … are pretty indiscriminate and even if you are a wild creature it’s an awful way to go.”