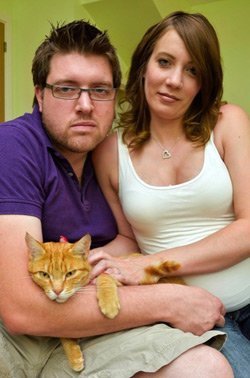 A distraught couple have warned other animal lovers to be on the look out after their cat was caught in a snare.

Steve and Jess Woolnough’s two-year-old pet Freddie was found caught around the neck in a home-made wire trap, designed to get tighter as the animal caught struggles, at around 1pm on Wednesday.

Phillip Brinkley, who works for Blenwood Grounds Maintenance, spotted the distressed moggy as he was cutting the grass in a Swale council-owned field behind the couple’s home in Barnfields Court, Murston.

After rescuing Freddie from the snare and removing several other traps attached to the perimeter fence, Mr Brinkley took him back to his work yard in Upper Field Road, Sittingbourne, where he gave the animal some food and water.

The 55-year-old then took the cat back to his home in Herne Bay before returning to the Great East Hall Estate later that night.

After an hour of knocking on doors he finally found Freddie’s owners at about 8pm.

Mrs Woolnough, 29, said: “Had it not been for Phillip being in the right place at the right time, our cat probably would have fallen foul to these inhumane people so we are eternally grateful to him.

“Thankfully, Freddie has not sustained any real damage, but these traps had been set with the intention of causing ­serious harm.

“There are lots of cat owners in the area and many people walk their dogs in the field so we want others to be aware of the traps.”

Mr Brinkley, who has worked for Blenwood for more than 15 years, said: “We cut the field up there about once a month.

“I didn’t notice any snares the last time we were there but then it’s not something you’d really look for, it was just unlucky this cat was caught in one.”

A spokesman for Swale ­council said: “We are extremely sad to learn that snares are being set on this land.

“We would urge anyone with any information to contact the police so those responsible can be identified and dealt with.”