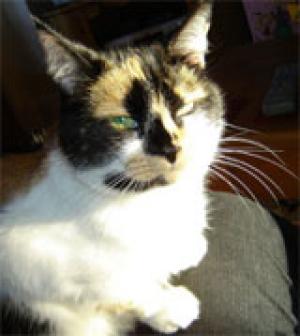 A COUPLE said today they were devastated after their cat became caught in a snare and died.

Chris Gibbs, 35, and Nikki Humberstone, 32, of Dodgson Terrace, in Acomb, York, branded the actions of whoever set up the snare as “shocking and irresponsible”.

The couple noticed on Monday morning that they had not seen their tortoiseshell cat, Holly, since the previous evening, and so they started calling to her from their back garden.

Mr Gibbs, whose partner is expecting a baby at any time, said that after they had shouted Holly’s name, they could hear her crying from a few gardens away.

Mr Gibbs said that he went to investigate and found Holly.

She was caught in a snare – made from a stick, twine and copper – that was tightening around her middle, and she was bleeding.

He said that Holly was dying in his lap on the way to the vet, and that her heart stopped beating as the vet was listening to it.

The couple had got the eight-year-old cat from the RSPCA when she was one, and that they had become very attached to her.

“We were devastated,” he said.

“What worries me is that it was an illegal home-made animal snare. It could have been laid by someone who’s got a vindictive nature against cats – there’s only one reason why someone puts down a trap like that.

“We don’t want this to happen to another cat. There are a lot of cat lovers down our street, and there’s a lot of concern over it – it could have been anyone’s cat.”

Ms Humberstone said: “If a child had been there, they could have done themselves an injury on it, which makes it even more shocking and irresponsible – to have something like that in a built-up residential area.”

A spokeswoman for the RSPCA said: “The RSPCA was contacted on Monday August 27 regarding an injured cat which was found in an alley close to Carr Lane in York. An investigation has been launched into any offence which may have been committed.”

Nick Howard, a vet at the Tower Veterinary Group, in East Parade, York, where Mr Gibbs took Holly, said she had been in a “traumatic event”.

What are they for?