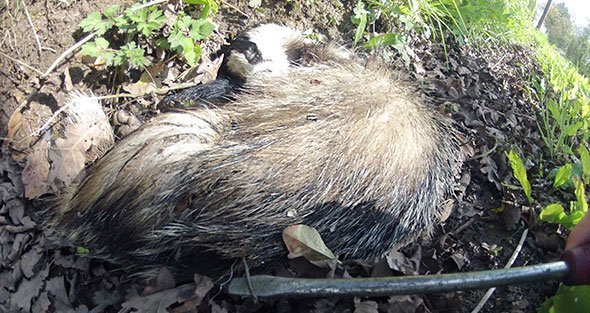 The need to ban snares was underlined by the agonising death of a badger, campaigners said.

Graham Lee, of the Badger Trust IW, was called out to a dead badger in Hamstead Drive, near Shalfleet.

He said he was horrified to find snares around the badger’s neck and abdomen.

One snare around the neck was old and rusty and had been cut, perhaps weeks before. The other, around the abdomen, was much newer and had broken the skin and damaged underlying tissue. It had also been cut.

Mr Lee said police were investigation and warned that badgers were not the only at risk — domestic cats and dogs could easily be snared, maimed or killed.

Simon Wild, of the National Anti Snaring Campaign, said: “This is the third badger that has been found dead or seriously injured in the last two years following snaring on the Island.”

He said he suspected the snares had been cut to release the badger because it was ‘a non-target species’.

“However, the Department for the Environment, Food and Rural Affairs has recently published a report into a major study on snaring in England and Wales, and found commercially available snares were causing such injury that they did not meet our obligations under the International Agreement on Humane Trapping Standards. I would call upon all gamekeepers on the IW to abandon snaring for predator control as it is inhumane and contrary to the best interests of conservation.”