An adult boar badger was found dead in a dragger snare at Star Cottage roadway off Welham Road, Norton, Malton, on April 24, 2001. 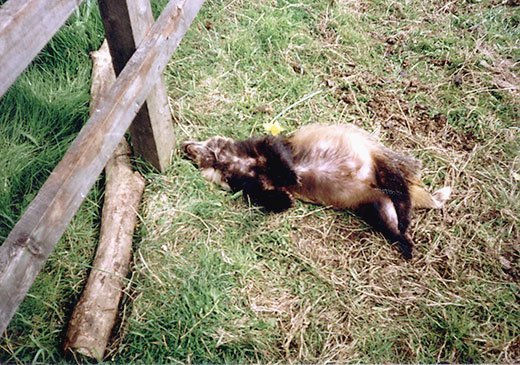 The badger was found by a man whose dogs were disturbed at 4 a.m. that morning and were restless from then on. The badger was not there the previous evening. The body was found 85 yards off a main urban road. the centre of Norton and Malton is less than half a mile away.

The badger was snared around the neck with a free running commercially made snare. the snare wire with swivel attached, this in turn was attached to a 4 foot 6 inch ash branch and would be described as a “dragger snare.”

The badger had walked clockwise twice around the fence post on the lane of Star Cottage Stables and choked to death. There was fresh blood in the badgers mouth, no other injuries were present. It looked to be a young adult by its clean even teeth.

The nearest main badger setts are about a quarter of a mile away and about 50 yards away.

Dragger snares are not commonly know about by the average member of the public.

The North Yorkshire Police attended the scene and the badger was removed by us and put in the freezer.

The RSPCA was informed and it is hoped they will investigate.