An investigation by the NASC took place this week at Dunecht Estate in Scotland owned by Hon Charles Pearson.

One cat had returned in 2002 with a broken lower jaw and two missing canines, another had gone missing presumed shot in 2003, and a history of snared badgers has occurred culminating in a badger dying in a snare and another being released alive – all in the last few months.

During the investigation, henchmen intimidated and acted in a threatening manner towards two of our investigators (see photo below) on a public road. One of the female investigators felt extremely threatened and very scared when an 18 stone man constantly pushed his camera into her face. This restricted our investigation and is another reason why the Scottish Parliament’s new legislation tightening up the law on snaring cannot be enforced: estates do not want people checking their compliance with the law – and only a total ban will work.

There are no electric fencing around pheasant pens on the estate, which is a sign of bad practice, and although some unset snares were found, they appear absent on a large part of the estate including the Donnottar area where the badgers were trapped: snares had returned here a few weeks ago, but have now vanished!

It does seem that every effort will be made to cover up the dirty business on the estate, whether that is by the use of intimidating tactics of strong-arm men or by removing the evidence. We can now reveal that when the dead badger was found near Donnottar, a man associated with the estate had to be restrained from running off with the body while the police were on their way. He later claimed to police that he was not trying to hide the evidence, but was going to get the badger TB tested!!! 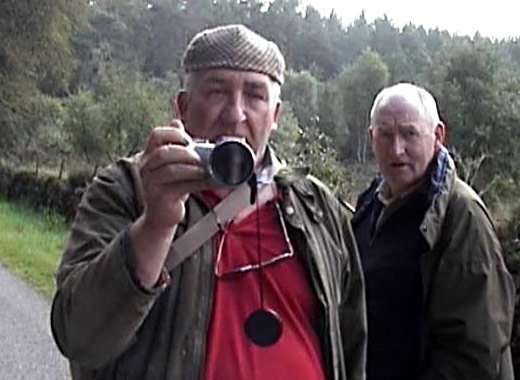 Two people from the Dunecht Estate weren’t too keen on our investigators checking snares. Given the estate’s recent notorious history we can only assume that they still have something to hide.