Are the Game Conservancy Trust involved in this callous experiment?

NASC has learnt that DEFRA is to throw £120,000 of public money on an inhumane and secretive project that had been put out to competitive tender. DEFRA remain tight lipped about who has won a highly dubious research project, although suspicion is falling on the bloodsport groups the Game Conservancy Trust or BASC, which will involve examining the level of injuries in snared foxes and rabbits.

In the history of the world, no one from DEFRA has ever checked to see what goes on with snaring on private estates, but are pushing through with this cruel experiment, despite overwhelming evidence of animal suffering and gamekeepers slaughtering badgers with snares set for foxes.

We say to DEFRA: put you neck in a snare and pull hard. Really struggle and do this overnight. If you have not enjoyed the experience, then you have the answer, and should now give the £120,000 to Childline and ban snares.

Flash back to last year: Photo shows NASC supporters outside DEFRA’s Temple Quey House, Bristol, after it was revealed they were conducting secret experiments on the level of injury caused to badgers in snares. 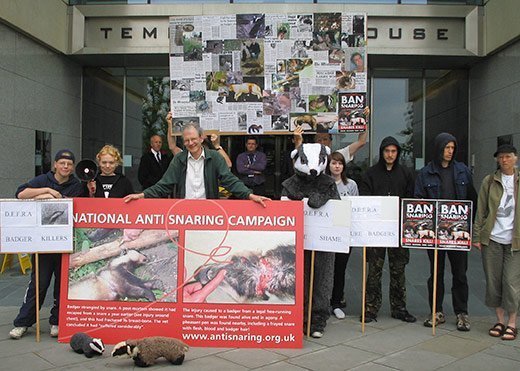