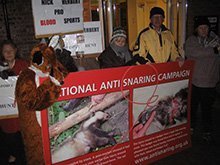 Mr Herbert was there to give a lecture as part of the “Distinguished Lecture Series” and campaigners wanted to highlight the background of Mr Herbert who has moved on to becoming an MP following a professional background as a campaigner for the pro-blood sports, British Field Sports Society.

A spokesman for the NASC said: “It was reported that at the recent Peterborough Royal Foxhound Show, Nick Herbert ‘addressed the throng, urging them to vote for any candidate that would repeal the hunting ban.’ We believe that the promotion of blood-sports is the number 1 issue on his agenda, and the well-being of the nation is very much secondary.

“Last summer dozens of snares were found the Norfolk Estate in Mr Herbert’s constituency; there was evidence a badger had been caught, and the badger population was very much less than would be expected. The snares are set to protect game birds preserved for shooting from predation by foxes, but are completely indiscriminate and cruel.

“Following the lecture, Nick Herbert was asked where he stood on the issue of snares, and while he said he did ‘not particularly like them, he would leave the issue in the hands of land managers and not intervene’.”

A campaigner for the NASC said: “We had hoped there might be a streak of decency in him, but we fear he is such a compendium of blood-sports, there is no hope for him.”