NASC investigators checking the Angmering Park Estate, Arundel came across a rabbit caught in Spring trap (Fenn Trap) on the 16th May 2007. Despite being trapped by its head the unfortunate creature was still alive but obviously in a lot of pain demonstrating once again that legal spring traps are inhumane. 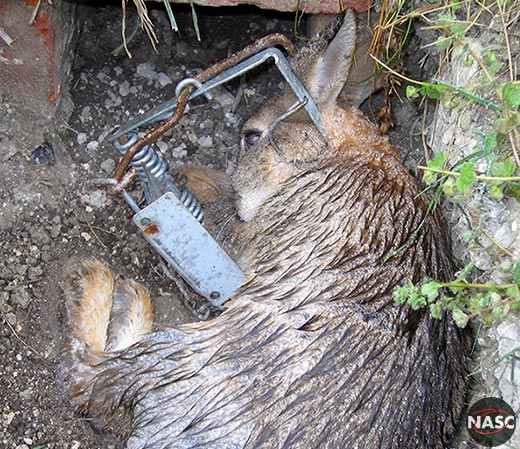 Anyone looking for snares is equally likely to find nasty spring traps that can legally be set in natural or artificial tunnels to catch small mammals such as squirrels, stoats, rabbits. The Spring Traps Approval Order 1995 governs their use in law.

Despite freeing the rabbit from the trap and rushing it to a vets it died overnight. Below is the vet’s report.

The rabbit, as you know, died overnight on the day it was brought in. Its main problem was shock and hypothermia. The post mortem did not reveal any significant physical injuries.

It’s clinical signs and behaviour while it was alive were consistent with shock and profound hypothermia. Whilst there did appear to be some neurological abnormalities to its behaviour, I could not be sure that these were not wholly attributable to the hypothermia.

I believe that the animal was caught, probably struggled and became hypothermic, but it would be impossible for anyone to determine over what sort of timescale this would have occurred over. It could have occurred within a 24 hour time frame.

We are sending details to DEFRA as this example highlights our serious concerns that spring traps are inhumane.

I stumbled into your website earlier today and was reading the article about the rabbit caught in a mk4 fenn trap. I would like to inform you I am a gamekeeper on my own small shoot. The reason the rabbit was still alive is because that is a MK 4 fenn trap only to be used for squirrels/rats etc. I find this very cruel that someone has gone out and done that, Rabbit on my estate are either shot or ferreted I cant believe the gamekeeper who set that trap did not the the right tool for the right job. Not only that he caused suffering to the rabbit he has once again given the decent majority of feildsport enthusiast a bad name.