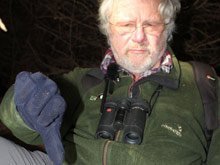 OneKind (formerly Advocates for Animals) has commissioned a new film, starring popular broadcaster and naturalist Bill Oddie, which demonstrates the extent of snaring in the Scottish countryside.

The film, entitled “Snares uncovered: Killers in the countryside”, shows Bill’s disbelief at the number of animal snares placed on a typical estate, as well as his shock at the indiscriminate nature of these cruel devices. OneKind would like to thank Bill Oddie for taking the time to participate in this film, and for his ongoing commitment to the campaign to end snaring.