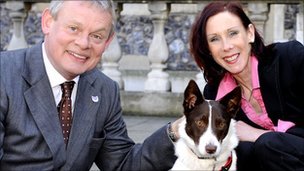 A RESCUE dog from Toton who lost a leg in a fox snare has won a national award for its harrowing rescue story.

She was presented with a rosette and trophy by Emmerdale actress Lorraine Chase, and was introduced to actor Martin Clunes at the event.

Penny’s owner Ellen Stevens, of Toton, said: “The people who organised the awards said Penny was the star of the show, as she’s so cute.

“Everybody made a fuss of her and Martin Clunes picked her up and cuddled her.”

Mrs Johnson and her husband Jonathan adopted Penny in October.

She had been rescued by the Furry Friends Animal Rescue Centre, in Surrey, in July.

Penny was abandoned by her previous owners and tied underneath a caravan. She managed to escape and became pregnant while she was a stray.

Penny then went into a garden to find a spot to give birth, but got her leg caught in a fox snare and became trapped.

When she was found, her leg was hanging on by a small thread of skin and she was in labour.

“I saw a photo of Penny on the rescue centre’s website,” said Ellen, 48, who is a professional dog walker.

“I’ve always tried to help out rescue centres and I rang up to see if she was okay, and if I could donate any food for her.

“The woman from the rescue centre was coming up to Nottingham with another dog, and asked if I would like to see Penny.

“I couldn’t help but fall in love with her.”

Penny is now 18 months old and has settled in well with the Johnsons. They have three other border collies, which Ellen said was important for helping Penny get settled.

“Our dog Lottie welcomed her and played with her straight away.

“When she first came to us, she was very nervous and used to wee everywhere, but she’s now a very bouncy, happy dog.

Penny was nominated for the award by Emma Semple, from the Furry Friends Animal Rescue Centre.

Ellen is running this year’s Robin Hood marathon to raise money for the Furry Friends Animal Rescue Centre that looked after Penny.