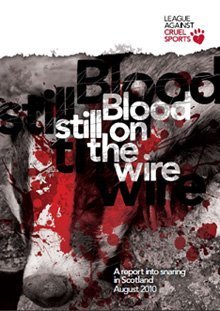 The League Against Cruel Sports has released shocking new evidence exposing the horrific suffering inflicted by snares and other traps to animals on shooting estates in Scotland.

A graphic film and report, both titled ‘Blood Still on the Wire’ are being released to coincide with the start of the grouse shooting season. The ‘Glorious Twelfth’ traditionally celebrates the first day of shooting but the League is using this to highlight the terrible suffering caused by snares on estates rearing game birds for shooting.

Both the film and report document how the recently introduced Snaring (Scotland) Order 2010 has done very little to eradicate the threat snares pose to the welfare of animals. League investigators visited a number of estates in Scotland between May and July this year as part of wider investigations to expose the reality of the shooting industry.