Britain’s wildlife is being needlessly persecuted because legal loopholes are allowing people to maim and kill native animals without reproach, campaigners say.
In 2016, the government rejected a motion by MPs to ban snares, which catch and wound an estimated 1.7 million animals every year, including pet dogs and cats, as well as badgers, sheep and lambs.
The animals suffer “protracted and gruesome” deaths, according to wildlife supporters including television star Chris Packham, who are lobbying the government to now introduce a ban.
At the same time, a loophole on how police forces record wildlife crime means the true level of cruelty is unknown and cannot effectively be policed, according to the Naturewatch Foundation.
Badger baiting, setting dogs on foxes and chasing hares all have to be recorded as miscellaneous, not specific wildlife crimes.
Reports by experts have previously revealed how the wildlife crime underworld in the UK is “rampant”, with “shockingly low conviction rates”. Criminals profit from gambling on hare coursing, while the widespread illegal hunting, trapping and poisoning of native animals exacts a heavy toll, the reports by Wildlife and Countryside Link say.
Packham says snares, which are used by gamekeepers and some farmers to catch “pests” such as foxes, hares and rabbits, are “antiquated and barbaric”.
The devices are wire or steel nooses designed catch animals’ necks to restrain them until the operator comes to kill the animals.
The Springwatch presenter said wildlife said animals caught in them may die of thirst or are attacked by other animals, adding: “The fact these are still being used legally in the UK countryside in the 21st century is a complete anachronism.”
Animal Aid, which is fighting for a ban, says evidence shows that some snares are not checked for days, if ever, leading to “unacceptably prolonged, inhumane and terrible ways to die”.
The organisation, which claims snares are widely used on shooting estates to keep numbers of game birds high, says: “Animals have even been known to try to chew off their own limbs to escape. Their pain and distress is unimaginable.
“It is also possible that lactating mothers can be caught, which means their babies would die of starvation, without her.”
Government figures in the past have estimated that seven in 10 animals caught are species such as cats, dogs, badgers and sheep not intended to be caught.
Some critics have branded the devices “evil” because the more an animal struggles, the tighter the wire becomes, inflicting even worse wounds. 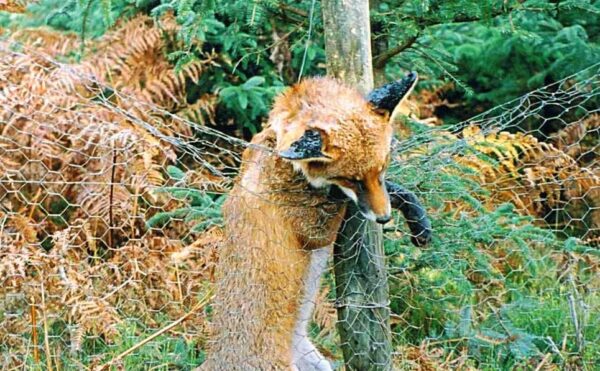 Defenders of snares say they protect ground-nesting birds, game birds and chickens from predators.
Green Party MP Caroline Lucas has tabled a parliamentary motion calling on the government to outlaw the manufacture, sale, possession and use of all snares.
In 2016, instead of banning snares, the government introduced a code of practice,
Meanwhile, animal-welfare charity Naturewatch is calling on the Home Office to make wildlife offences recordable as such in their own right, saying that currently they are classed alongside litter-dropping as miscellaneous.
“UK police have to lump in the barbaric cruelty towards our British wildlife with a whole host of other offences, which means that the true level of cruelty is impossible to understand, and impossible to effectively police,” a spokesperson said.
The organisation argues that having recorded police data would allow police to better crack down on offenders and fund the National Wildlife Crime Unit.
The Independent has asked the Home Office to respond. A spokesperson for the Department for Environment, Food and Rural Affairs said: “We are looking at closely at the use of snares as part of our continued drive to maintain the highest animal welfare standards in the world.
“Through the government’s Action Plan for Animal Welfare, we are looking at whether changes need to be made to reflect concerns raised.”